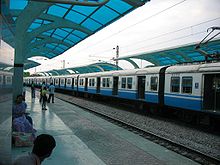 Miyapur is one of the most famous residential localities of Greater Hyderabad, and it comes under the Serilingampally Mandal of Rangareddy district. The area is located strategically on the National Highway 9, which connects Pune through Machilipatnam and the Intermediate Ring Road which connects National Highway 7 to Bengaluru through Miyapur. Well developed colonies with lush green parks and beautiful lakes and cool environment have made Miyapur Real estate a potential real estate market. Miyapur has good connectivity by road, rail and airways. It is situated at a distance of about 30kms from the Rajiv Gandhi International airport and about 25kms from the Nampally Railway Station. Miyapur connects to other major parts of the city via the Outer Ring Road, Inner and Regional Ring Roads. It is located very close to the LB nagar circle, and the Begumpet Airport.

The Andhra Pradesh State Road Transport Corporation (APSRTC) provides many bus services from Miyapur connecting many places inside and outside the city. The main reason behind the increase in the sale of Miyapur apartments is its connectivity with major IT Parks of the city.

Even though Miyapur is a residential area, it has several business establishments with software companies and many other industries located in its surroundings. Some of the localities and sub localities surrounding Miyapur include Kukatpally, Balanagar, Nizampet, Madeenaguda, Ganesh Nagar, Kondapur, Serilingampally, Chandra Nagar, Lakshmi Nagar and Swarnapuri. Major stations surrounding this locality include Secunderabad Station, Kacheguda (KCG) Station and Hyderabad Deccan (HYB) Station.

There are many prominent schools and colleges providing quality education to the students. Some of the educational institutes include

Miyapur also has a number of restaurants, hotels, shopping malls, fire stations, police stations, hospitals and other clinics. Sri Shankara Nethralaya Hospital, Sai Teja Hospitals, Sri Krishnamurthy Specialty Dental Care are a few prominent hospitals around this locality. Apartments in Miyapur are developing at a rapid pace. With the growing demands, property rates have increased in the locality.

There are many lakes around this locality, which are not only aesthetic but also attract many residents and tourists. Some of the key landmarks and famous lakes in the surrounding areas of Miyapur include Miyapur Patel Cheruvu, Hafizpet Cheruvu, Madeenaguda Cheruvu, Gangaram Cheruvu, Ameenapura Cheruvu, Miyapur ‘X’ Roads and the Allwyn Colony Junction.

There are many development projects coming up in the locality. A few of them include the expansion of Hyderabad Metro Rail, Elixir City at Ameerpur and Hyderabad BRTS (Bus Rapid Transit System). All these proposals have improved the number of residential plots for sale in Miyapur, as people want to stay closer to well developed areas. Ushodaya Constructions, Prajapati Elite, Landmark Towers, Virtue Heights, Janapriya West City, Prajapati Elite Phase II, Sai Anurag, Bhanu Township Orchid Block and Four Square Elegant are some of the residential projects in the area. Legend Coconut Grove, SMR Vinay City, Mayuri Meadows, Aliens Elite and Aparna County are some of the premium Villas in Miyapur.

Necessary amenities, peaceful locations and excellent transport have made Miyapur the most preferred residential property location. The cost of multi storey flats for sale in Miyapur is between Rs. 2,930 to Rs. 3,539 per sq ft. And so the average cost of 2BHK apartments in Miyapur could be around Rs. 34 lakh and that of 3 BHK could be around Rs. 49 lakh.